Canada’s railway giants, CN and CP, are testing battery and hydrogen locomotives in a move toward electric, zero-emissions freight rail.

At least one smaller railway, Southern Railway of BC, is working on hydrogen locomotive technology too. 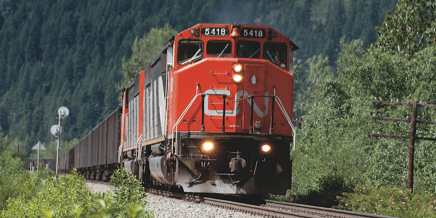 Though the transportation sector is the second-biggest source of greenhouse gas emissions after oil and gas, the Railway Association of Canada says rail generates only 3.5 percent of transportation emissions.

“Rail companies are now facing pressure from both governments and shareholders to reduce emissions,” said Josipa Petrunic, president and CEO of the Canadian Urban Transit Research and Innovation Consortium. “Especially now that the price on carbon is expected to ratchet up over time and, with it, the price of diesel that powers Canadian trains.

“They know they’ve got to cut this cost before it starts hitting their bottom line,” said Petrunic, who co-authored a 2020 report on rail innovation in Canada.

Gord Lovegrove, associate professor of civil engineering at the University of British Columbia Okanagan, agreed that there is increased shareholder pressure on railways to address climate change.

“And that’s why [electrification] is happening in advance of any federal regulation,” he said. But he noted that diesel-burning trains also generate a lot of other pollutants that are bad for human health. These include nitrogen oxides, fine particulate matter, as well as sulfur dioxide linked to acid rain.

In urban areas, these pollutants and the noise generated by locomotives can be a huge nuisance near switching yards, which is where rail cars are stored, loaded, unloaded, and hitched together. The small switcher locomotives that move cars around in those rail yards represent just a fraction of Canada’s locomotive fleet, Lovegrove said, but can generate double or triple the emissions of a long-haul locomotive engine.

“The BC government has started to charge fines for older, more polluting locomotives,” Lovegrove added. “But it has promised to return the last three years of fines back to Southern Railway of BC, if it retrofits its locomotives to include zero-emission technology.
“So not only are they realizing reduced fuel costs, reduced public complaints, but they’re getting money back to fund their business case.”

In the longer term, given climate and pollution concerns, he said, rail companies need to electrify “because diesel is going to be regulated out of existence.”

CN Rail, headquartered in Montreal, announced in November that it had purchased a Wabtec FLXdrive battery-electric heavy-haul freight locomotive. The company has set a target of reducing its greenhouse gas emission intensity by 29 percent by 2030 compared to 2015 — and achieving net zero by 2050.

Janet Drysdale, CN Rail’s vice-president of sustainability, said 85 percent of the company’s emissions are produced by its diesel-powered locomotives. “So, solving this locomotive issue is really critical for us.”

CN said the electric locomotive, which will operate along with up to six other locomotives, could reduce emissions by up to 30 percent on routes where the topography allows it to partially recharge the battery with regenerative braking. Regenerative braking recovers some of the energy used to slow down the vehicle and turns it into electricity.

In the future, Gina Trombley, executive vice-president, and chief commercial officer for Wabtec, said the companies expect most of the recharging to happen via overhead catenary wires and pantographs, similar to those used by streetcars, during low-speed loading at locations such as grain terminals.

“In order to fully operationalize fully electric locomotives, you’re going to have to find a way to charge on the move,” she added.

Trombley said the CN project is still at the design stage, but the two companies think they’ll have the locomotive running in the second half of 2023.