Around the world today, the storage of liquid fuels and other petrochemicals in enormous volumes is no easy task. For starters, it’s imperative that the storage facilities involved are operating within established specifications and that their as-built designs match original blueprints.

One of the ways to ensure this, is through a piping and instrumentation diagram, or P&ID – an essential compliance document that identifies all process equipment and how these physical assets work together as part of a mechanized process. Think of a liquid fuel/petrochemical storage facility as a living, breathing entity. And the P&ID is the roadmap for how its innards function and how these disparate physical parts work and fit together. 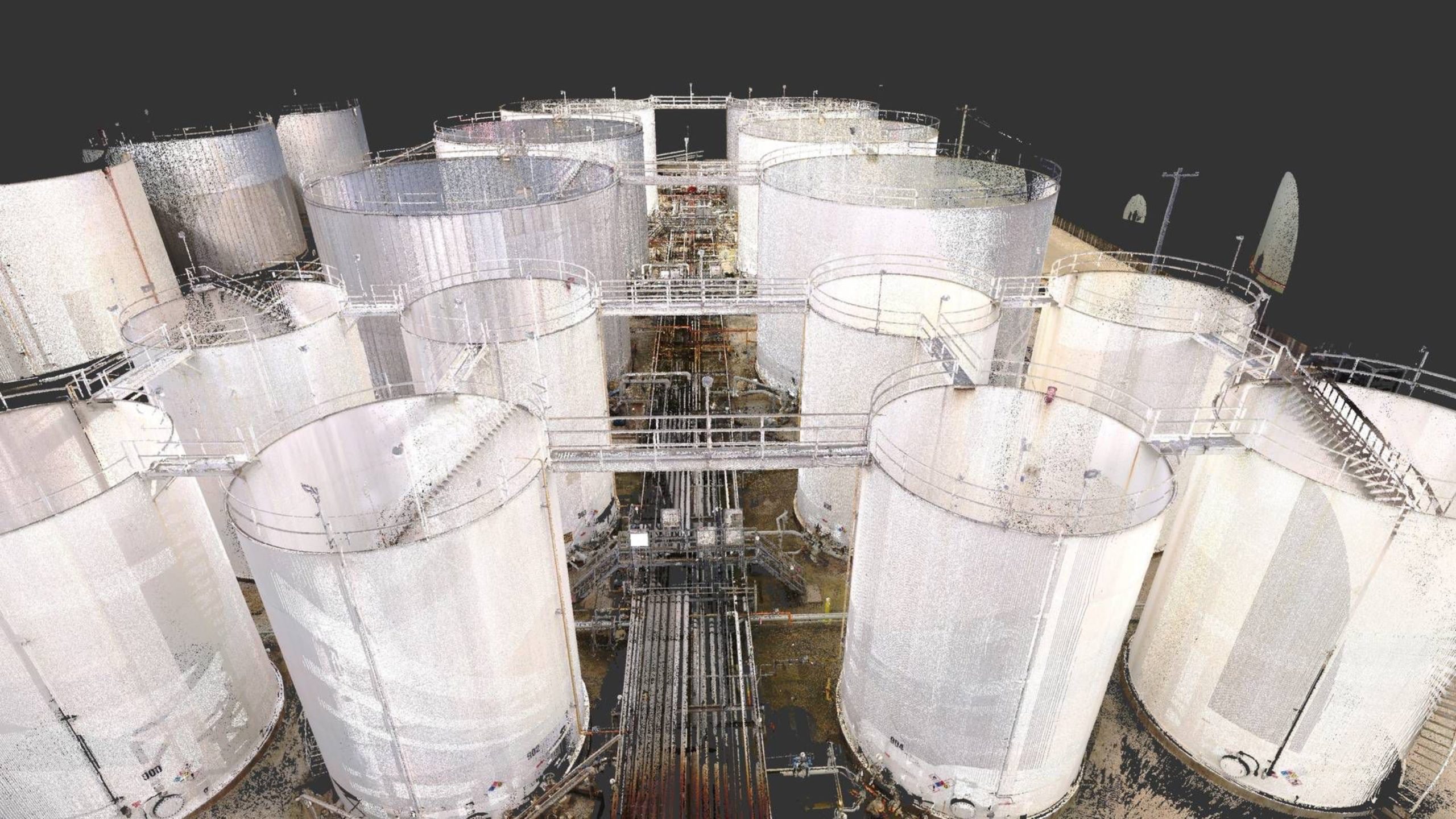 Traditionally such diagrams were generated via manual measurement necessitating a team of surveyors measuring a facility’s static and non-static assets by hand. The work involved significant health and safety risks such as working at height, trips and slips, to hazardous substances ranging from general exposure to bird droppings (guano), with associated time and budget implications. To accomplish these tasks measuring tape, pens, pencils, clipboards and a significant amount of personnel hours were all required.

Industrial Interoperability Begins With A Piping And Instrumentation Diagram

“The Focus Laser Scanner was chosen because of its data capturing speed, portability, which was key for scanning in tight spaces, its ruggedness in different areas of site and consistent clear images which would be key for our CAD team in developing P&IDs,” explained Lewis Boxer, A3D’s Technical Director. “The scan data was processed in SCENE because of its obvious compatibility with the Focus scanners and its variety of built-in clean up filters such as edge, range and stray point. SCENE is also fully equipped with a range of registering tools including target-based, natural targeting and cloud-to-cloud, which, when working on a site with a range of variables, you need software that’s adaptable to different challenges.”

Digital Diagramming At Its Best

The Houston facility, part of the Americas division of the Netherlands-based Royal Vopak, boasts a storage capacity of 1.2 million cubic metres spread out across 243 tanks. Located at the head of the Buffalo Bayou with access to Galveston Bay and the Gulf of Mexico, the nearly 2km long storage complex stores biofuels, chemicals, petroleum products, base oils and lubricants. In addition to barge and vessel, the facility is also accessible via truck and rail – transit points that according to at least one oil industry consultant – have given the city its reputation as the “Grand Central Station of the South.”

Vopak had already retained a company to perform manual surveying of its storage terminal but had grown concerned the partially finished project would take two to three years to complete. Such a timeline was incompatible with concurrent business initiatives and so they sought out A3D, in partnership with its US subcontractor to complete the 3D laser survey.

After each shift the scans were uploaded via SFTP directly to the A3D server allowing for the UK-based team to complete scan file registration, including the filtering and processing of the data. This process ensured they could report on any missing data to the survey team ahead of the next scan shift. The survey was completed in three months during the Texas wet season with a total of 5,136 scans recorded. Instead of taking the two to three years to wrap up using traditional surveying techniques, A3D completed the entire project from start of site scanning to delivery of Smart P&IDs in just 10 months.

To work as efficiently as possible, A3D planned the individual aspects of the job to run concurrently wherever possible. For instance, once an individual area was scanned and registered, they were converted immediately, ready for the CAD team to start building the P&IDs before returning to HTS for field validation and client team for remote E&I updates. It was only then that they were handed over to Vopak in their as-built perfect form. The entire process was streamlined so that scanning was prioritized to align with the order in which P&IDs were to be delivered, starting within days of the first recorded data. Running a project that amounted to over 650 P&IDs required detailed tracking which A3D achieved internally using specialist project planning personnel and software. The results were shared with key client stakeholders during weekly progress meetings.

For each area, a drawing template was built which significantly sped up the process of building the subsequent P&IDs for that area and maintained a user-friendly, consistent standard throughout. The laser survey provided ample detail for A3D to create everything except remotely connected instrumentation, which would be added from Vopak’s existing P&IDs, DCS panels or existing wiring diagrams.

The ultra-portable and rugged Focus Laser Scanner was ideal for Vopak’s needs specifically because it is designed to capture ultra-high accurate measurements of equipment and pipework in challenging outdoor environments – like a liquid petrochemical storage facility in the middle of the Texas hurricane season.

The scanner features a sealed design and is certified with the industry standard Ingress Protection (IP) Rating, IP54, meaning that the Focus can be used in wet weather and at temperatures up to 131 degrees Fahrenheit, comfortably below Houston’s record high of 109 degrees.

But for all the time and budget savings a project like this was able to achieve in the short term, thanks to the Focus Laser Scanner/SCENE duo in creating 2D P&IDs out of 3D laser scans, the greatest benefit might come in the years ahead.

That’s because Vopak (and companies like them) are increasingly reliant on this form of imaging versus, say, photogrammetry to gather the surveying data they need to secure a complete 3D survey of their site. This is a highly accurate and precise dataset that can be used for many ancillary projects including: API570 inspection isos, tank verticality, bund volume analysis and as-built 3D process models. It could even be used for mapping plant design, or complete facility upgrades.

“It’s not just the initial projects you’re paying for,” Lewis Boxer added. “It’s the other continuous deliverables that are born out of it. Typically, when you think about point cloud data you think about 3D models. But with A3D’s specialist techniques surrounding 2D P&IDs and related projects, it’s really so much more. The possibilities are endless.”